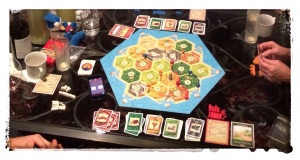 So, have you had the pleasure of playing a game of Settlers of Catan yet? Perhaps with a nerdy twenty-something in your life?

“It’s a board game Mom, come on you’ll love it. It’s pretty easy once you learn the rules.”

Oh the rules…. We’ll get to those later, but first the premise: Each player is a settler trying to build settlements and cities by acquiring and trading resources. You get victory points as your settlements grow and the first one to get ten victory points wins. Sounds easy enough.

As I sipped a second glass of wine, the kids proceeded to lay out the hexagon-shaped board pieces with pictures of grass, bricks, rocks and wood on them, placed some number tokens (seemingly randomly) on top of those, divided up some cards into stacks and handed me the dice.

“What’s that?” I asked, pointing to a lonely wooden man standing on a board piece that looked like the desert.

“He’s the robber. Don’t worry about him until someone rolls a seven.”

“Just tell me. What does he do?” I insisted.

“Well, if you roll a seven, you get to put him on any tile you want and those people can’t collect their resources until he is moved the next time a seven is rolled. Also, you get to steal a resource card from someone, and if anyone is holding more than seven cards in their hand, they have to put half of them back.”

My eyes began to glaze over before she got the the part about the resource card. I silently hoped that all the rules wouldn’t be so complicated but it didn’t take long for that worry to be confirmed.

I won’t  spoil it for you by spelling out all of the rules (truthfully I can’t remember half of them) but there’s something called the longest road and that gets you some extra victory points or something and there are ports and you can trade resources with other players when it’s your turn.

But you start by placing your first settlement and road on the hexes with the numbers on them that will be rolled by the dice most often so that when those numbers are rolled, you can collect resource cards. Being my first time to play, I had no idea what any of this meant and I just put my little blue house on a pretty grassy spot.

I soon realized the foolishness of this decision because you need different resource cards to build more settlements and to turn those settlements into cities and to build more roads to connect them all. A brick, a wood and a rock (I think) can buy you one road. You can build a settlement with some grass, a little wood and bricks or something or other. Don’t ask me what it takes to build a city.

All I know is that by claiming something called a two-for-one rock port, and rolling lots of sevens and putting the other players (who had placed their first settlements in the prime resource-gathering spots) out of commission with the robber, and by getting a couple of those pretty development cards – an hour and a half later, I WON! It was totally beginner’s luck, but still! And I know it irked the kids because they were so close to winning themselves.

Catan – as it’s called by the ‘in crowd’ is one of those games that when one person gets close to winning, several others are right there too. My confession –  it was actually pretty fun! And, we got to spend some quality time with the “kids”.

Of course, once they had us hooked, we were talked into buying an Expansion Pack so there can be even more players in a game. I’m afraid to go over to their house now because with the expansion pack, comes MORE RULES. But I’ll gladly play along, sip my wine and keep rolling sevens any day just to be spending time with the little nerds.

8 thoughts on “A Settlers of Catan Confession”