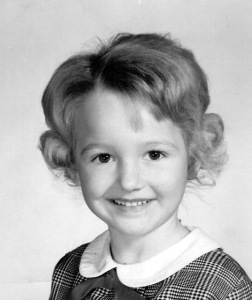 It was a sunny spring day in the U.P. (Upper Peninsula, Michigan). That doesn’t necessarily mean it was warm, but at least there weren’t several feet of snow piled on the sides of the road any longer. There were no snow pants, boots, hats, gloves and parkas to deal with. Gone (for another year) were the brutal blizzards, hours of snow shoveling, and the need for dads to put a heater under the hood of the car to keep the engine from freezing.

We lived about six blocks from the elementary school on Kincheloe Air Force Base. I was a toe-headed kindergartener and happy to be out of school for the day and walking home. My hands were free – Mrs. Mayo sent no “smiley face” papers home that day. In fact, it was a rare day when I was forced to carry anything more than myself home. This was before the days of heavy backpacks crammed full of books, papers and pencils – before hours of homework cut into evening T.V. watching time. This was kindergarten.

Girls were required to wear dresses. Mine was black and white plaid with a red bow at the white, Peter Pan collar. It had a pleated skirt that fell just above my knobby knees, and I was wearing a white cardigan with only the top button done. I can still see my little feet – white ankle socks inside new black Mary Jane’s. I have three sisters (two younger, who hadn’t started school yet – and one older, who got out of school later in the day) and I walked home alone. I guess there weren’t any other kindergarteners who lived nearby, because after I made the one turn onto Harper Street, I was the only kid around. But that was fine by me. Even at five, I liked my alone time.

Something kept me from noticing when the men began yelling at me – until it was too late.

I may have been counting my steps. Counting things becomes an integral part of my daily life – a way of dealing with stress. I couldn’t control much of what went on in our house, but I could control the counting. Or maybe I was daydreaming again about being an orphan who gets adopted by a mom and dad who don’t drink. These parents are rich and they have a brand new station wagon and they take their kids to Disneyland every summer.

“Stop! Get off the sidewalk!”

The urgency of their words finally broke through and I suddenly became aware that I was in some kind of trouble. My heart raced, eyes wide, I stood still in a moment of panic. The same stance I take when I’m awakened in the dark of the night by Mama’s screams. Somehow I’d missed the orange cones blocking the way and had been inadvertently leaving little Mary Jane footprints in a stretch of newly repaired sidewalk. I was petrified that I had made a mistake. I was a good girl. I didn’t do bad things. I always did what I was told and tried to keep the peace. I believed that if I could be good enough, no one would get drunk, no one would fight, and no one would have to cry themselves to sleep, ever again.

But I had bigger troubles than just these men yelling at me. The seriousness of the situation became crystal clear when I looked down and saw the white cement creeping up the edges of my new shoes. Mama was going to bust my butt. She would surely use Daddy’s belt instead of her hand for ruining my new shoes. This could upset the delicate balance and turn the whole household upside down for days. I got off the sidewalk and ran as fast as my little legs would carry me.

I don’t know if those men came behind me and smoothed away my footprints or not. I don’t remember ever looking for them, or telling anyone that this ever happened – at least not for several decades. But I do remember rushing home, pulling off my shoes at the front door, and running up the stairs, my socked feet slipping on the smooth wood. I remember locking the bathroom door and turning on the faucet at the sink. I remember holding one shoe under the water at a time, scrubbing away the drying cement, holding my breath until the last of the evidence was washed down the drain. I remember being very careful not to let the water get inside the shoe because I knew it would stay wet for a while and that might give me away.

After using the hand towel to pat dry my now clean shoes, I exited the bathroom, walked across the hall into the bedroom I shared with my older sister, and placed my shoes in the closet. I’m sure this is when I was finally able to breathe normally again – to exhale and believe that I might have just avoided a disaster. Quickly, I changed into play clothes and went down to the basement where I joined my younger sisters in front of the black and white television just in time for a re-run of Lassie – where she too would save the day.

5 thoughts on “Caution! Wet Cement and Other Childhood Dangers”

Let's talk about it! Cancel reply

Featured on NPR’s All Things Considered!

Please do not participate in or encourage piracy of this or any other copyrighted material. Thank you.
Join 517 other subscribers

Featured on NPR’s All Things Considered!